Home > Company > Press > An Open Letter to the Community 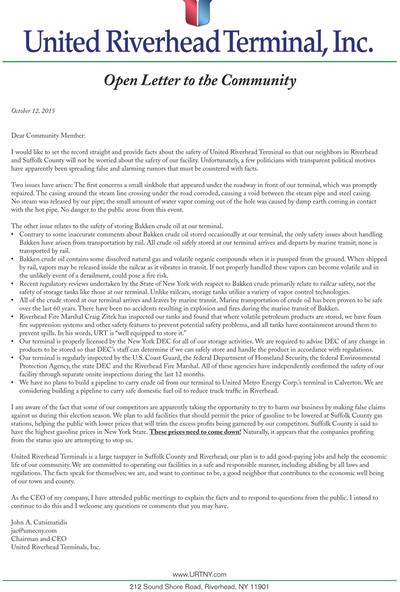 I would like to set the record straight and provide facts about the safety of United Riverhead Terminal so that our neighbors in Riverhead and Suffolk County will not be worried about the safety of our facility. Unfortunately, a few politicians with transparent political motives have apparently been spreading false and alarming rumors that must be countered with facts.

Two issues have arisen: The first concerns a small sinkhole that appeared under the roadway in front of our terminal, which was promptly repaired. The casing around the steam line crossing under the road corroded, causing a void between the steam pipe and steel casing. No steam was released by our pipe; the small amount of water vapor coming out of the hole was caused by damp earth coming in contact with the hot pipe. No danger to the public arose from this event.

The other issue relates to the safety of storing Bakken crude oil at our terminal.

I am aware of the fact that some of our competitors are apparently taking the opportunity to try to harm our business by making false claims against us during this election season. We plan to add facilities that should permit the price of gasoline to be lowered at Suffolk County gas stations, helping the public with lower prices that will trim the excess profits being garnered by our competitors. Suffolk County is said to have the highest gasoline prices in New York State. These prices need to come down! Naturally, it appears that the companies profiting from the status quo are attempting to stop us.

United Riverhead Terminal is a large taxpayer in Suffolk County and Riverhead; our plan is to add good-paying jobs and help the economic life of our community. We are committed to operating our facilities in a safe and responsible manner, including abiding by all laws and regulations. The facts speak for themselves; we are, and want to continue to be, a good neighbor that contributes to the economic well being of our town and county.

As the CEO of my company, I have attended public meetings to explain the facts and to respond to questions from the public. I intend to continue to do this and I welcome any questions or comments that you may have.